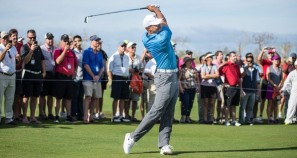 I didn’t have a job at 21, and I didn’t have much focus in life either, which is probably why I filled up a backpack and disappeared for a year. So it comes with plenty of jealousy that at the same age Jordan Spieth has managed to find the secret to success and become a double-major winner.

At the conclusion of the third round Spieth was asked whether he’ll feel the pressure going into the final round of the U.S. Open as joint leader, he responded with a lot of confidence considering the fickleness of the course conditions:

“None, other than I feel like we have a winning formula to close the deal in a major championship.”

Spieth now has four PGA Tournaments wins, two of them majors and you get the impression the big ones don’t even scare him a little now, maybe they never did. Either way they’ve just got a lot easier to win going forward.

Let’s forget comparisons with Tiger Woods. Woods dominated his generation, by the time he won his second major at the 1999 PGA Championship it was already his 11th PGA win.

No one is ever going to be as prolific as Tiger Woods, but one gets the ominous feeling that Spieth’s DNA is aligned in a different direction altogether, a compass heading that Woods himself has been charting over the course of three separate decades.

Spieth is a grinder, he velcros himself to leaderboards and stares his opposition in the face. He doesn’t intimidate, he doesn’t bomb it 340 like Johnson, Day or McIlroy and he isn’t the best iron player either. But he rarely lets things slip, holes putts when he needs to and has a tidier short game than most.

Remind you of anyone?

Jack Nicklaus knew the value of presence, self control and mental toughness. Mentally, there might not be anyone in the game tougher than Spieth and he does it day in, day out every Thursday to Sunday.

In April he closed out the Masters byleading after every day and his reaction while watching Dustin Johnson coming down the last offered at least a glimpse into the steely control he holds on his own game and the confidence he possesses.

Asked how it would have felt had he not won, after double-bogeying the 17th?

“It would have stung a lot, because it was mine. I controlled my destiny, it would have been tough to swallow”

It confirmed the confidence twoven into his game. He expects to win every time he is in contention, he doesn’t want to rely on others’ mistakes, although in the majors this is like a bonus dice roll for him. When in charge of a tournament, he fully expects to finish it.

And when you are in control of your game as often as he is, then it’s up to others to try and stay in control of theirs, and in majors so often they cannot. Exactly the same philosophy that Nicklaus held throughout his entire career. He too found the majors easier to win and he knew only too well that if he took care of his own game, the pressure would take care of others.

Loui Oosthuizen, Adam Scott, Jason Day and Rory McIlroy couldn’t grind it out for four consecutive days. The pressure took care of Johnson and Branden Grace too. Spieth though, stayed in control for all four days, despite a rare error on 17, he sandwiched it with birdies either side. Importantly, his mistake came with an opportunity to repair it, unlike Johnson whose mistake at the last meant instant knockout.

“I didn’t have that [the winning formula] at Augusta, but this week with perhaps not my best ball striking, combined with Michael’s knowledge of this place, to keep me in it and then to use that winning formula mentally, to stay in the game, when I was out of it for some of the day today, is awesome, it gives a lot of confidence going forward.”

It’s just difficult to get perspective on a kid that has just won the first two majors of the year. The youngest since Gene Sarazan to win two and you have to reach all the way back to 1923 to find a younger US Open Champion, and when you do, you see it’s Bobby Jones!

OK, let’s not get into comparison, because he isn’t Nicklaus either. At least not yet.